skip to main | skip to sidebar

In trying to think of what to write on this blog one of the things I find I have a problem with is putting the stories I remember in the proper timeline. I’ll try to do my best but if anyone remembers differently feel free to email me and correct me.
While thinking about what to write this week I found myself trying to remember when I first started working at my parents store. My Social Security Statement says I started paying into Social Security in 1973, um lets that would be when I was 16, I know I was earning a paycheck from the store before that. I remember around the time I started grade school my dad having a fit if I stayed home on Saturday mornings watching cartoons. 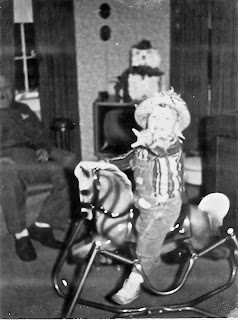 So I guess it was around that time in my life. I remember going with my mom on a Friday night, back then banks stayed open late on Fridays, and opening a checking account to deposit my first paycheck. From then on Friday nights took on a whole different meaning to me. To this day I feel like I need to do something special on a Friday like go to the dime store and buy a dollars worth of cashews or something!
So most of my life I get a guilty feeling on a Saturday morning if I’m not doing some chore or going in to work. But then some of the better memories of my dad took place on those sleepy eyed Saturday mornings rambling down the back roads of southwestern Wisconsin going to some farm or little country corner store/tavern to work on their broken milk cooler or beer cooler. We would discuss the worlds issues and problems or talk about the farm we were passing, then we would get to our destination for the morning and while my dad made the introductions and diagnostic interrogation I would gather up the tools we would need. Typically I would grab his red toolbox and the set of refrigeration gages and I would head off for the milk house if we were at a farm or the back door of the tavern if that was where our services were needed. Once my dad had asked all his questions we would start checking things out, was there anything obvious wrong like a blown fuse a refrigeration line off somewhere. If he could get the unit to power up we would put the gages on and see if there was any refrigerant left in the system, if there was we would wait. This is where I usually lost interest; I couldn’t wait and would fidget and wander about while my dad sat there starring at the unit we were working on. Over time I got better at this watching thing and later in my life actually found I had developed the unique talent of diagnosis by extended observation myself.
Eventually my dad would come up with a diagnosis and we would affect the repairs needed. Seventy-five percent of the time there was a leak in a solder joint somewhere in the system, this was remedied with a quick re-soldering of the defective joint which meant I had to go back to the vehicle and retrieve the torch and soldering stuff. We would affect the repairs and then wait again to make sure our repairs fixed the problem or was this just one of many problems. If the problem involved a minor part like a relay or switch my dad would root around the vehicle to see if he had a replacement part or one that could make do until the correct part could be ordered and installed. If there was a major part needed like compressor then we would drive back to the shop and root around to see if we had one to replace the defective one or if we had one that could be used to limp along with until the right part could be retrieved. Remember we were doing this on a Saturday and unlike now back then come noon the world almost came to a stop in southwest Wisconsin. Except for taverns… come Monday my dad would drive to Dubuque Iowa or Madison or Milwaukee for the correct compressor and install it no mater what time it was when he got back.
Posted by Terry Weygant at 9:09 AM No comments:

The origin of Weygant's Appliance

About a year and a half ago I received an email about this now cob web log from Phil Gadke, the son of one of the current owners of my parents appliance store, Weygant’s Appliance. I don’t know what has kept me from replying to Phil’s email. Maybe I just wasn’t ready write about it, or just couldn’t get my thoughts together until now. Phil asked several questions about the origins of the store and I think I’ve got my story straight.
The hardest part of writing the history of my parents store is figuring out where to start.
My dad, Bob Weygant, attended the Milwaukee School of Engineering in the 30s and studied refrigeration. A side story about my dad while going to MSOE was that during the first summer break from school he installed an improvised air conditioning system in my grandparents house by pumping water from the well through a radiator he put in the forced air furnace.
After MSOE he got a job selling and installing refrigerated display cases through out the Midwest. After a while of doing that he got a job with the RC cola company in Rockford installing and fixing soda coolers and dispensing machines. He met my mom in Rockford just before the war and during the war they got married and moved to Camp Douglas in northern Wisconsin where my dad worked for the army Quartermaster Corps as a refrigeration tech.

After the war my dad and my mom moved back to Platteville where my grandpa helped them buy a hardware store and building on the south end of main street. While there I was born.

At some point the hardware store wasn’t doing very well and they sold it to Heisers and started Bob Weygant’s Refrigeration, which was the beginning of Weygant’s Appliance.

Posted by Terry Weygant at 7:01 PM No comments:

Terry Weygant
Racine, WI, United States
I’m self taught in the arts of tech, or better put my brain was wired for this stuff at an early age. My parents had an appliance store and growing up, pre OSHA, rather than have my mom stay at home with me or pay for day care, which really didn't exist in rural Wisconsin back then, my pop put my play pen in the shop next to what ever gadget he was working on and kept his tools in my pen, Oh Boy would child protection have a ball with that now a days. I'm told I knew the difference between a Philips head and a flat blade screw driver before I could walk... My work background is in electronics with many years of manufacturing experience from electronics technician, automated material handling equipment technician to manufacturing information systems manager, purchasing manger and most recently supply chain manger.